KTP Associate Nour Rteil has carried out extensive experiments into the performance gain and energy efficiency of different generations of servers. Here she takes us through the ground-breaking results she and Rich Kenny shared at DCW Frankfurt in November 2019. Read Techbuyer’s interview with her here:

What is the idea behind the research?

“We wanted to carry out benchmark testing on a variety of hardware configurations and server generations to see how each compared with the others in terms of compute power and energy efficiency. After testing performance of refurb vs new, and finding out it was basically the same, we wanted to see if refreshing from a previous generation would be as good as refreshing with the latest generation. Taking this option would save natural resources as well as money, which is good news for all of us.”

Which section of the server market was the research focused on?

“This batch of experiments tested the energy efficiency of an HPE ProLiant DL380 Gen 10 server with a Gen 9 server and the environmental impact of manufacturing a rack server. We will be running more exhaustive tests as the project continues and will be sharing the information with our customers so they can pinpoint the benefits of using refurbished servers in terms of cost, energy efficiency and overall environmental impact.”

What is the background to the research?

“A recent study co-authored by Rabih Bashroush examined SPECpower power trends for dual node servers, which shows an increase in performance per watt accompanied by an increase in idle power consumption. This is of high significance given that servers in real-life deployments are utilized 20% of the time on average in data centres and are idle the remaining time. The same study says that server performance at 100% target load had the highest jump in 2015, was flat till 2018, and increased slightly in 2019. More importantly, the idling power of servers increased from 2015 onwards.

What was the outcome of the experiments?

“The results were as expected. A Gen 9 with Intel Xeon E5 v4 processor (12 cores) was able to outperform a Gen 10 with Intel Xeon Skylake processor (10 cores), with both processors having 14nm lithography. Further, adding 32GB RAM to a Gen 9 with E5 v3 processor made major improvements on efficiency, outperforming a base Gen 10 with a Skylake processor. I made a graph to demonstrate these results and shared this at DCW Frankfurt.” 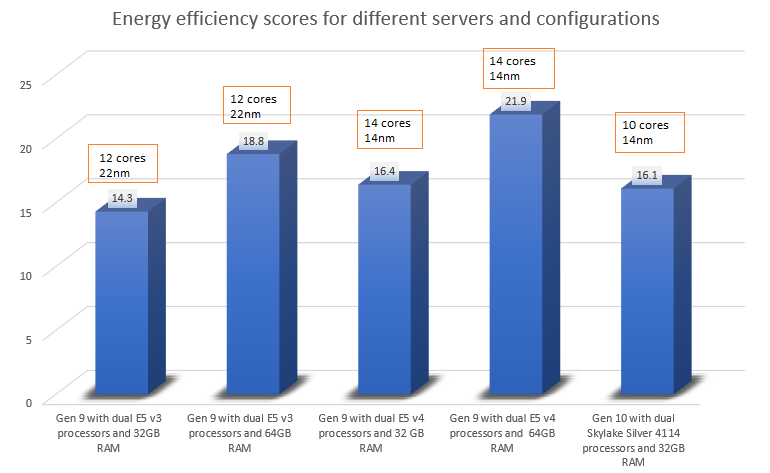 Do your findings mean we can say similar things about other generations?

“It is worth mentioning that this case would be inapplicable for previous generations. For example, an HPE ProLiant DL380 Gen 8, released in 2012, will not outperform a Gen 9 by adding 32GB of RAM to it. That’s because there was a big jump in server performance in 2015 as demonstrated earlier so the extra RAM will not outweigh the gains in server performance. Also, looking forward, we can’t predict the performance of servers in the coming years because it highly depends on the processor’s technology in use. AMD already released its 7nm processor in September this year, and Intel are expecting to release their 7nm processors in 2021, which will boost server’s efficiency (expectantly power idle as well). However, given present technologies, refreshing servers with latest servers will not add any substantial benefit to refreshing it with properly configured and expertly refurbished server, after 2015.”

How big of a difference will this finding make for customers?

“Not only does refreshing servers with refurbished ones cut the capex costs for computing infrastructure almost in half, reusing servers saves tons of environmental resources, waste and emissions. We have some information on this which we will be sharing shortly. For now, we can say that reusing equipment saves a huge amount of water and energy that would be in the manufacturing process of new.”

Techbuyer is a global specialist in the buying and selling of new and refurbished data centre equipment. Nour Rteil is the Associate Developer of our 2 year Knowledge Transfer Project (KTP), in association with the University of East London, which aims to revolutionise the way IT managers think about hardware configuration in data centres. To find out more about our IT hardware, check out our Refurbished Servers page. 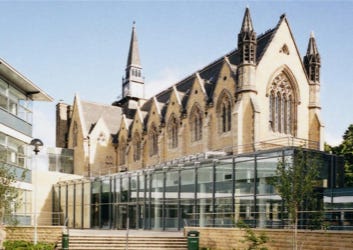 University of Leeds Explores the Benefits and Barriers to Refurbished IT 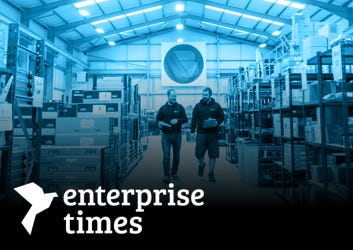 When our team began to grow, so too did our need for a large-scale syste... 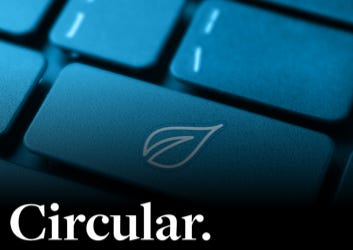 The IT industry is facing sustainability challenges. One example is e-wa...